Welcome to the new Glendalough Guided Walks website. Here you will find all you need to know about the service we offer and as well as booking details.

I am delighted to include some photos of our beautiful valley from my good friend and local photographer Deborah McCoy .

Some images that have inspired me over the years taken by my good friend and local artist Deborah McCoy.

Glendalough (Irish: Gleann Dá Loch, meaning “Glen of Two Lakes”) is a glacial valley located in County Wicklow, Ireland, renowned for its Early Medieval monastic settlement founded in the 6th century by St Kevin, a hermit priest, and destroyed in 1398 by English troops. Kevin, a descendant of one of the ruling families in Leinster, studied as a boy under the care of three holy men. During this time, he went to Glendalough. He was to return later, with a small group of monks to found a monastery where the ‘two rivers form a confluence’.

His fame as a holy man spread and he attracted numerous followers. He died in about 618. For six centuries afterwards, Glendalough flourished and the Irish Annals contain references to the deaths of abbots and raids on the settlement. 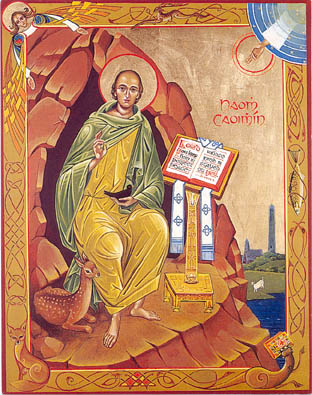 offers visitors the opportunity to journey

into the secret heard of Ireland’s

most beautiful and historic valley

The walk will cover:

This is a gentle walk of approximately 1.5 to 2 hours.  There are no mountains or hills to climb.